Immigration Crisis: How did we get here? What can we do?

For the most part I grew up in West Texas, about three hours from the border, and we raised our children there. For decades I made many observations about immigrants from Mexico because in West Texas they are an integral part of the culture. Many are “illegal”; many have lived there for generations long before their white counterparts; many are “Dreamers” brought here as children. This culture has existed for a long time, harmoniously living their lives, going to school, and going about their daily business. 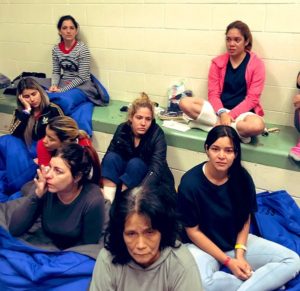 As an educator, I was never encouraged to turn in an illegal family to the authorities. It was understood that everyone benefits when a community’s citizens are educated. I wondered that no one ever turned in a businessman for hiring “illegals.” Ranchers hire them; construction companies hire them; restaurant owners hire them; farmers hire them to harvest their crops.

But as I grew into adulthood I realized that no one really wanted to change the status quo.

There is a certain hypocrisy at play. The fact is that businesses benefit by having a resource for cheap labor, and the benefits trickle down to local citizens in various ways. Some say, "They take our jobs!" Really? No, they do the jobs most of us don’t want to do.

So here we are today with a “crisis” at our border. People are coming here in droves seeking asylum. We’re separating children from their parents and putting them in circumstances we would never want our own kids to be in. We’ve truly lost our way and the American values we’ve held dear.

How did we get here?

For many years we’ve all known that our immigration laws needed an overhaul. And yet those we’ve elected to office have lacked the political will to work together to come up with sensible immigration reform. And we seem to be ignorant of the fact that the market for drugs in the U.S. helps create the conditions causing much of the corruption that drives people to flee, seeking asylum here.

I have often thought if I had a chance to go to "the land of opportunity" to make a better life for my family or more especially to escape the brutality of drug lords or seek asylum from rape and murder, would I do it? Of course! And you would too!

What can we do?

First, let’s stop scapegoating immigrants. Let’s start seeing the faces looking out at us on the evening news as people, as human beings with families who love them as we do our own, as people who have fled conditions we also would have fled, as children who need their parents, loving care, a decent place to lay their heads at night, and food to fill their empty bellies.

If you want conditions at the border to change, write your congressional representatives. Tell them to do their jobs, to do what we’ve sent them to Washington to do — to pass comprehensive immigration reform — now!

People — adults and children alike — need to be treated as human beings with adequate food, clothing, and shelter while they are waiting to be processed. Provide the necessary judicial, humanitarian, and medical personnel to process these people quickly and efficiently instead of relying on current Customs and Border Protection personnel to take responsibilities they are not trained for or equipped to do and that take them away from their duties.

How many times in life do we observe that taking preventive steps averts a crisis? Fire prevention beats putting out fires. We are in a crisis situation because preventive steps were not taken a long time ago. It’s up to “we the people” to demand that our representatives take action to end the inhumane conditions at the border and resulting consequences we will have to live with for many years to come.

KBAD member Claudia Kling originally wrote this editorial as a Facebook post. She gave Kyle/Buda-Area Democrats permission to publish it on the KBAD website. MEMBER VOICES submissions reflect the writer's opinions, not necessarily those of every KBAD member or officer.

From block walking and phone banking to donating and utilizing your unique skill set, KBAD has many ways for you to get involved.

Together we can turn Texas blue!